Sports betting is popping up everywhere, but will it come to Massachsuetts?

This can be looked at in one of two ways: how much money is Massachusetts loosing to each of these four states as residents travel to them to wager, or how many people in Massachusetts are prevented from the potential social effects of sports betting due to the inability to wager within the state? 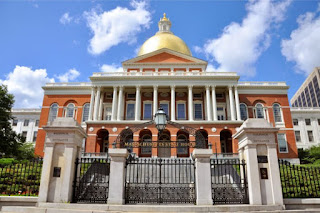 It is hard to find legitimate stats for the number of Americans with sports betting addictions, as a true survey is virtually non-existent of how many Americans have sports gambling-specific addictions.  However, in research from the National Council on Problem Gambling, and reported across several sources including the New York Times, NBC News and Bloomberg, it is reported that about 1% of American adults, which is roughly 2.5 million Americans, have "severe" problem gambling.

In a further examination of this data, Bloomberg reports that 2-3% of adults have "less severe problems" from gambling, but gambling still is responsible for "financial and social miseries".  According to Bloomberg, this represents 6-8 million Americans.

The State's Budget, the Economy and Social Effects

Which brings us to the Commonwealth of Massachusetts, and the underlying question: is sports betting good or bad for the state?  Clearly there are going to be mixed opinions about the social ramifications of sports betting, but what does it mean for the state's budget and the local economy.

Across the country in 2020, sports betting generated $1.5 billion in revenue, up 69 percent from 2019, according to NBC News.  With those being 2020 numbers, and the amount of states legalizing sports betting rising to 30 as of January 2021, the revenue is sure to sharply increase.

From these numbers one can make a case for the benefits of sports betting from the state's standpoint.  But there is a little bit more to the story - in fact, there is a lot more.  The economic benefits must be weighed in as well, which will ultimately contribute to state tax revenues.  Local bars and casinos in the state will almost certainly see an increase in patrons, as many television networks have seen a rise in sports ratings as wagering becomes legal in more states.  Sports betting can attract patrons, who sometimes will go to a bar to watch the game, or go to a casino to wager.  Especially if the casino has a deluxe sports book with many TVs, all games, sofa chairs and a bar. Whether betters are attracted to a sports book in a casino, or a bar to wager on a mobile device, the state will benefit from tax revenue.

The question remains, what will benefit the Commonwealth more: tax revenue from sports gambling, or helping to prevent increased gambling addictions.  There will always be the argument that no matter how long you prevent sports betting apps or sports books from the state, there will undoubtedly be underground sports betting taking place within the state.  With that being said, it should also be noted that keeping sports betting illegal will discourage a certain amount of people from having access to it.  Either way you look at it, there will be a price to pay.  The question is, how does Massachusetts want to pay for it?  A loss of revenue by not allowing sports betting, or a potential increase in addiction by allowing it.  Only time will tell.