The New England Revolution may have lost in the Round of 16 in the MLS Is Back Tournament last month, but fortunately for fans, the Revs will have another life in the 2020 season.

Major League Soccer is set to restart the season this month, with home games played at teams' venues, including the Revolution's Gillette Stadium.  The Revs will return to regular season action in Foxborough on August 21, but unfortunately for fans, the stands will remain empty. 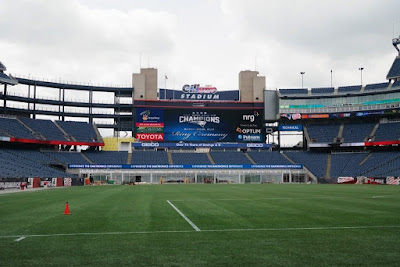 The Revs are scheduled to play six additional games in a phased-approach just announced by MLS, three of which will be at Gillette Stadium.  All three home games will remain closed to fans, who will be able to watch all games live on regional and national television.

Five of the six games, including the first on August 21, will be broadcast regionally of NBC Sports Boston, with one game on August 29 against Red Bull New York televised live nationally on FS1.

While the news is mixed for fans and the businesses at Patriot Place that rely on games to drive foot traffic and sales, it ultimately is a first step towards bringing soccer back to local markets during the league's fight to keep players, fans and staff safe during a pandemic.

On a typical Revolution game day between March and November, shops, restaurants and hotels at Patriot Place see a large increase in walk-in traffic and revenue.  This is an enormous help during the summer months, since Patriots home games only affect August through January.   And with questions over the upcoming National Football League season, these businesses could potentially be hit with even more months of lost revenue.  Whether or not the Revolution will be able to host fans for the second phase of scheduling remains to be seen.  But one thing is for sure, plenty of businesses at Patriot Place can only keep their fingers crossed, as the pandemic continues to threaten both sports and the local economies where the games are played.

Less than a month after news officially was released that the Massachusetts Pirates would not be returning to the National Arena League, the franchise has announced a press conference set for Wednesday, August 19 to discuss the team’s future.

Since 2018, the Pirates have called the DCU Center home, and have given no signs that they will make any venue changes for the upcoming season.

One potential league the Pirates could join would be the Indoor Football League.  The IFL was founded in 2008, comprising of 13 teams throughout the country, mostly in the western region of the United States.  But after the IFL announced last month that an expansion franchise was awarded to Columbus, Ohio, the possibility of an east coast team in the IFL is more realistic.

Details for this story are still unfolding, as more information will be released by the Pirates on August 19 during their press conference.  Stay tuned to Twitter @zbaru for continuing coverage and live tweets of the press conference.