The game was part of the Fenway Gridiron Series, a five-game football series at Fenway including 3 college football games and two high school games between November 10 and November 22.  The series is promoted by Fenway Sports Management, and is yet another attempt to make Fenway Park more than just a baseball stadium for 82 regular season Red Sox games.

Year after year, Fenway has seen an increase in concerts and sporting events, as the Fenway Gridiron Series is an excellent way to make the venue a year-round destination for fans, just as Gillette Stadium and TD Garden is each year.

The big question is, was the less-than anticipated attendance of 12,000-plus strictly because of the weather, or was it something else?  UMass for years has been trying to increase their presence throughout the eastern part of the state, playing games at Gillette Stadium and marketing themselves as a team for the entire state.  Clearly the end result has been sub-par, as a game against a regional rival in a venue as special as Fenway Park should have had a much bigger crowd.

If the windy, cold weather truly contributed to the lack of fans at Fenway, then possibly UMass Football could make a return visit.  For UMass, the goal has long been to market more across the eastern part of the state, where more of the population and larger sponsors are located.   Hopefully in the near future UMass sports can find a way to attract larger crowds in the Boston-area, which would only help promote and grow the UMass sports brand. 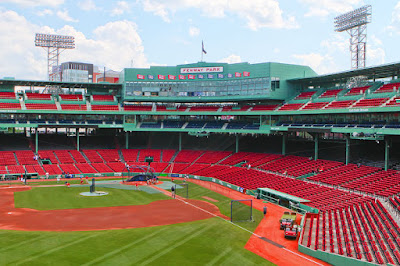 Three marketing challenges for the Red Sox in 2017

It comes quicker and quicker each year.  The 2017 Major League Baseball season is upon us, and with it comes a whole new list of challenges for the marketing department of the Boston Red Sox.  While this is anything but a full list, here are a sliver of the issues the team will face in 2017 from a marketing standpoint.

Issues from the recent success of other Boston teams, to a worldwide sports issue in the the ever-changing ways of society and the attention spans of young fans, to the criticism that has already begun from the media and fans about the teams' recent performance.

For the Red Sox, marketing and public relations has historically been handled well, and is one of the franchise's best off-the-field assets.  Every year brings something new to focus on, and shown from the attendance numbers and broadcast ratings, the team gets the job done.  Sometimes we take for granted how hard it is to manage teams in the seventh largest media market, and arguably the top market in terms of on-field success in the last twenty years.

The 2017 Red Sox season begins with the Patriots coming off a fifth Super Bowl win, in a market has long set the bar high for professional sports.  Playoff appearances, division titles, or even league-leading records are practically meaningless to the high-standard Boston sports fan.  And for good reason: in Boston, success is expected.  Period.

While the Celtics are not at the Patriots level of success, they are still on the upward swing, climbing towards the level of success that Boston sports fans expect.  They are young, explosive, and exciting to watch.  And most of all, they weren't expected to be where they are right now.  Boston sports fans are hard working individuals that appreciate a team that works equally as hard as they do.  The Celtics are just that, and enjoying an exciting 2016-17 season that is winding down shortly.

For the Red Sox, the bar is just as high as it has ever been.  Boston fans expect more than just a playoff appearance in 2017.  This is the great part about being in a successful sports region.  It makes the fans demand more, and forces the franchises themselves to strive for more.  The question is, how will the Red Sox market themselves to promote that they are on the path to a successful season?  The message needs to be sent out early to capture the interest of fans, especially during a potential Celtics playoff run in the coming months.  The consequences could be a backseat in the Boston sports landscape.  And with the MLB loosing their market share to other leagues within recent years, this is a risk the Red Sox cannot afford to take.


2. The decreasing attention-span of viewers.

Ask any parent, teacher, or anyone who is frequently in contact with our youth, and they will tell you what is happening to society.  It is a decreasing attention-span, and it is spreading to more than just the millennials.  The ever-increasing option of instant gratification has been growing for years, and for baseball, is causing a huge problem for retaining viewers and fans.  The Red Sox, like all other baseball teams, need to tackle this issue quickly.

Football is full of ten second "highlight reel" plays, that capture the excitement of movie clips for sports fans.  Collin Cowherd brought this up years ago, and it is something that is a major issue for all baseball teams.  As popular as the Red Sox are, they are no different - they still have to win back the battle of their fans' attention, especially the young fans.

Basketball and hockey have similar "highlight reel" flows to the game, and while baseball will always have home runs and diving catches, it is still a three-hour game in a world that now demands information in 140 characters or less.  The question is simple: how can the Red Sox win back these fans?  The answer, however, is not so simple.  It will take extensive marketing, strategically crafted for young fans and fans who baseball is most at-risk for losing.

Social media will be a key way of reaching these fans, but should not be the only focus.  The fans that are turning away from baseball still watch plenty of television and listen to sports radio on a daily basis.  The marketing campaigns need to reach these fans that are leaving the game, and prove to them that baseball is changing and is still worth watching.  The longer baseball waits to tackle this issue, the further it will get from winning the battle.

3. Criticism from the media and fans.

Criticism from the media and fans in Boston will be nothing new to the Red Sox.  The bar for success is hard to debate - it is high in Boston.  And no one will be feeling that more than John Farrell, who has already felt pressure from the media and fans.  David Price continues to get criticism from both the fans and media alike, and Pablo Sandoval's contract has also generated some discussion, as he is in year 3 of his $95 million contract.  But the criticism does not end there, leading to the question of how the Red Sox will send a message to the fans ensuring that they are heading in the right direction.

Positivity will be key, and should be a focus for marketing this season.  Fans need to be aware that this team is on the path to success.  With good, positive marketing, the Red Sox can steer the conversation away from all of this criticism during the off-season.

The Red Sox front office may have a lot on its plate when it comes to marketing the team in 2017, but one thing is for sure, history tells us that they know how to handle it.  They have one of the best marketing teams in not just present-day sport, but sports history.  This is the same franchise that marketed "Paint the Town Red" back in 2003, and sold us on a group of guys that were counted out in 2013, and went on to become world champions.