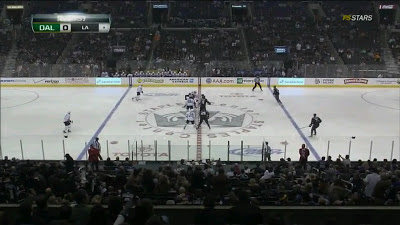 As if New England sports fans have not seen enough advertisements for Bob's Discount Furniture, you may have noticed during the last Bruins road game that the brand has invaded the New York Islanders' dasherboards digitally, using LED dasherboard advertisements.  Coincidentally, the last three Bruins road games have all been played in arenas with LED dasherboards, part of a trend in the National Hockey League that has been growing for years.

Not only did Bruins fans see this advertising at the Islanders' arena, which was the first venue in the NHL to introduce this technology, but fans saw it during the previous two games at the Florida Panthers and Tampa Bay Lightning.  While this technology allows franchises to show multiple advertisements instead of dedicating the space for one sponsor, the LED dasherboard is just simply an eye sore, in a league which strives on aesthetics.

For any extra revenue that could be generated from this technology, intruding on the visual aspect of the game is a lot to sacrifice.  Sure other markets such as Chicago use augmented reality to place logos for television on the glass behind the net, but let's deal with one thing at a time here.  Fortunately the Bruins do not use this technology on the ice at TD Garden, and hopefully that will continue into the future.

Technology continues to be a growing aspect of professional sports, and for the most part greatly aids the game, as well as the business.  Take soccer for example.  These days teams that play in venues that do not include field-level LED signage boards come across as outdated franchises.  The game presentation, especially for television, is arguably less exciting for soccer teams that do not use this technology. In Major League Soccer, newer franchises with a focus on marketing, such as Seattle and Kansas City, use field-level LED signage boards to give their sponsors maximum exposure.

The problem with using this technology in hockey is simple - hockey is not soccer.  The playing surface is much smaller than a large soccer field, making LED advertisements on the ice extremely distracting.

There will undoubtably be many more innovations in sports that change the way we watch games in the future.  While they can potentially increase revenue, there are certain occasions where what is most profitable may effect the game itself, which one can debate is ultimately detrimental to both the game and the business.  It may be something as small and harmless as LED dasherboards, but it is small aspects such as this that can begin to ruin the game, rather than keep it progressing in the right direction.

Lowell deserves another shot at the AHL 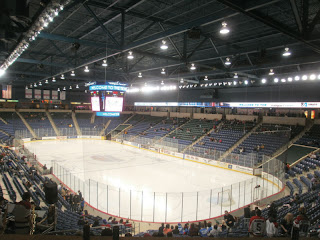 With a great arena, a hot hockey market, and a prime location near multiple franchises, the city of Lowell would be a great candidate for a new American Hockey League franchise.  The last franchise, owned by the New Jersey Devils, left Lowell for Albany after the 2009-10 season.

The lease beween the New Jersey Devils and the Tsongas Center ended in 2009-10, and was reportedly too good to be continued.  In February of 2010, the University of Massachusetts Lowell took ownership of the the 6,496-seat arena.  Later that year, Global Spectrum, a subsidarary of Comcast Spectacor, took over arena management.

UMass Lowell provided renovations to the venue, including a new video board, LED sinage, and a new sound system.  The result was an ideal arena for minor league hockey's highest level, the AHL.  UMass Lowell continues to play at the arena, currently averaging 5,114 fans per game, which is good for 12th in the nation for Division I hockey.

If college hockey can draw over 5,000 fans per game, than why couldn't professional hockey do the same?  The Devils left Lowell one season before the Boston Bruins won the Stanley Cup, which has since boosted hockey's popularity to an even higher level.  A low-priced alternative to NHL hockey could certainly have potential in this market in the present day.

On the other hand, history does speak volumes.  During Lowell's last season in the AHL, the franchise finished last in attendance, averaging 2,498 fans per game.  Fast-forward to today, and the league average is currently 5,587.  So can Lowell really keep up with the big markets in the AHL like Chicago, Cleveland and Houston?

With the resurgence of hockey throughout New England, an exceptional intimate arena, and a perfect geographical location to other franchises, Lowell truly is an interesting market for the AHL.  Interesting may not be enough to cut it, especially with the way the Devils finished in attendance in their final year.  But with everything Lowell has to offer, this is not a market to be overlooked.