Just when fans might have started to warm up to the extra ads in the corners, there is yet another change for fans to accept - presenting the "digitally enhanced dasherboards", or DEDs, new to the 2022-23 National Hockey League season.

It's not just the Bruins or NESN that is debuting this change this season, it is all teams, all broadcasters, both local and national.  A monumental digital change that perhaps some fans will not even notice.  Many, however, will notice the change, which has taken seven years in the making.  The NHL has been working with ad company Supponor, according to ESPN.com.  Advertisements along the dasherboards began in 1981 with the Minnesota North Stars, and fast-forward to 2022, the ads are not only digitally on the ice, but "replacing" the in-arena ads on the dasherboards as well.  But are these ads really "replacing", or simply modernizing a decades-old practice?

The Bruins are an institution in Boston.  A franchise with a rich history and rich tradition.  Anytime something affects the in-game experience for fans, even slightly, it is going to undoubtedly create frustration.  So the question here is how have long-time fans responded thus far? 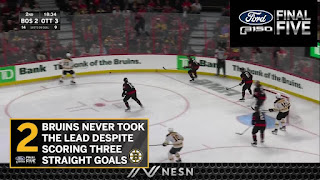 One way to look at this is ask has this affected the actual television experience?  With the exception of players skating in the corners and the digital ads blocking players, or in rare cases causing players to disappear quickly, it really has not affected the game experience much at all.  But yes, these slight glitches have been know to happen, with players in some cases completely blocked behind the augmented reality technology of the ads.  Additionally, there is to some level a charm of the game being played the way it has been for decades, with no digital enhancement whatsoever.  And for a franchise like the Bruins who are all about history and tradition, these changes will likely take more getting used to compared to a franchise that began in the 1990's, for example.

The technology is for the most part new, and while it did take seven years to develop for the NHL, it is still working off augmented reality technology that debuted in 1998 on "Sunday Night Football", which at the time was aired on ESPN.  This technology is best known for the first down markers that have become mainstream on all channels.  Later on, the AR graphics were implemented to full-screen stat graphics that are also mainstream on all national networks.  One example of this is when the NFL on Fox will show a full-screen stat graphic in-between plays, making the graphic look like it is part of the stadium.  In reality, of course, nothing is there - thus the augmented reality technology.

Here in 2022, the AR technology has made its way to the TD Garden, and is a fixture on all NESN broadcasts.  Perhaps it should be put in the category of green screens used in Fenway Park for ads during Red Sox games, which most likely has not affected anyone's enjoyment of the game.  Or maybe even the category of the Green Monster adding ads, although that is quite a leap for a comparison.  The point is ultimately fans, for the most part, do adjust.  But even more so, ultimately sports as a whole will always evolve.  Like it or not, the game will always change.  The technology on and off the field or ice will always progress.  For the fans, there is nothing we can do about this, it is part of the business model of sport.  And at the end of the day, that is exactly what this is, not just a game, but a business.