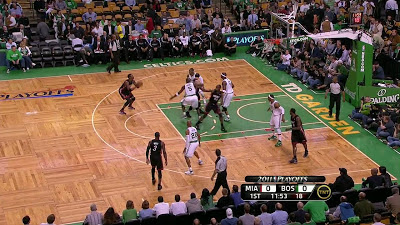 The Boston Celtics are somewhat of pioneers in the NBA.  No, not for anything basketball-related on the court, they were one of the first to change a common area of the arena - the court itself.

It has seen a lot of changes in the past few years, most noticeably the addition of two extra tables, along with additional courtside seats, and moving the announcers to their own table on the opposite side of the court.

These ads receive about 15 percent more exposure with the new configuration, and you can understand why other NBA teams have caught on to the innovative configuration.  One of the most recent teams is Cleveland, who changed the set-up of their scorer's table this season.

The next time you watch the Celtics on CSN, notice how often you can see the courtside ads.  This increases the value their sponsors get from courtside advertisements, making this a growing trend all around the NBA. 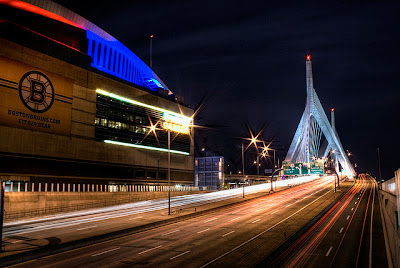 It is easy to dismiss hockey as a factor in the economy of the nation's seventh largest media market.  But for Boston, each home game that is lost in the current National Hockey League lockout represents a substantial economic loss.

The economic impact of an average Bruins home game is estimated between $850,000 and $1 million.  Anytime you have 17,000-plus fans pouring into an arena, both the neighborhood and the city forfeit the revenue of any event-related purchases.  While the economic impact is felt by the city, the real effects are on the small business owners that rely on hockey to bring in patrons.

The largest example of this are restaurants and bars, mostly in the North End, who see a large increase in business during game-nights.  Aside from the owners who are taking a financial hit, the employees also see a loss in earnings.  Hotels around the area can be effected as well, as fans, media and teams will be coming into town for the game.

If you are still not convinced, take a look at this.  Out of 30 NHL franchises, the Bruins were one of sixteen who sold out every home game last season.  Take the 17,565 fans who entered TD Garden each night, and multiply that by 41 home games.  The Bruins attracted 720,165 people to the North End during the regular season, each of whom represented a potential economic impact.

Many of the 700,00-plus fans coming to TD Garden for hockey games last season used public transportation, either by subway or commuter rail to get into North Station.  This is an example of a loss of revenue to the state, not to mention the loss of state sales tax revenue for any event-related purchases.

Without the NHL, Boston's economy will not crumble, but the league still represents an economic boost for the city and state.  From government, all the way down to small business owners and employees, the loss of the NHL will be felt by much more than just Bruins ownership.  For the city and the Commonwealth of Massachusetts, it is significantly important hockey returns to TD Garden.