Diego Fagundez leading the Revolution on and off the field

It is not often that a team's leading scorer creates so much buzz for reasons other than their scoring capabilities.  Then again, it is not often a team has a local athlete that is developed in their own academy and is only eighteen years of age.  For the New England Revolution,  Diego Fagundez is all of these things, combining stellar play with his massive off-the-field appeal, creating both excitement and attention for the franchise. 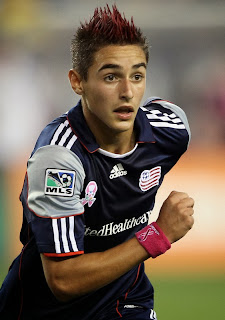 Fagundez, of Leominster, played on the Revolution's academy team before being signed to a senior roster contract on November 15, 2010, becoming the Revolution's first homegrown player.  The combination of his local ties and young age make Fagundez highly marketable to Major League Soccer's key demographic.  And let's not forget about his impressive skill.

A new generation of fans is watching MLS who only know the league in its present form as an established part of the professional sports landscape.  MLS has gone through its growing pains in the late 90's and now has a strong identity and following that has lead to the expansion of its 20th franchise earlier this year in New York City.  Fagundez represents a new generation of fans who for the first time the Revolution can connect to on a more personal level.

He attracts hundreds of fans seeking autographs after each home game, and he is very good about staying to sign them all.  And who can blame him?  After all, just a few years ago, he was them.  This is the connection that is so important for the Revolution and their fans, making Fagundez arguably the face of the franchise.  His popularity has gone national, most recently from being the subject of the MLS documentary program "MLS: 36", which aired on NBC Sports Network.  The appeal of Fagundez allows the Revolution to market their brand of soccer to more than the average soccer fan, which has always been, and continues to be a challenge for all MLS franchises.  That connection is something Fagundez has been able to master, creating attention from the non-soccer community and using his on-the-field production to make believers of soccer fans across the country.

Having a player with the appeal of Fagundez is a void the Revolution have had since Taylor Twellman retired in 2010 after suffering a concussion two years prior.  What is so special about Fagundez is that he is able to be marketed to both traditional and non-traditional soccer fans.  He is the team-leader in goals this season, earned MLS Player of the Week earlier in the year, and shows no signs of slowing down.

At just eighteen, Diego Fagundez delivers the high expectations with results week after week.  It is no wonder why there is so much buzz about this young athlete.  He is able to withstand the pressure, and shows so much joy doing it.  Meet Diego Fagundez, the newest, youngest star in New England sports.