Whether or not you are a golf fan, it is very easy to be a fan of the Deutsche Bank Championship.  Since 2003 when the tournament began, so many of the headlines coming out of TPC Boston in Norton were about the players and the scores, while the most important numbers are the charitable contributions.

From the tournament's inception ten years ago, over $24 million in charitable proceeds has been generated.  No, that is not a typo, it is a number that continues to grow each year, primarily benefiting the Tiger Woods Foundation.  In addition, the tournament benefits the Stop & Shop/Giant Family Foundation and other charities throughout New England. 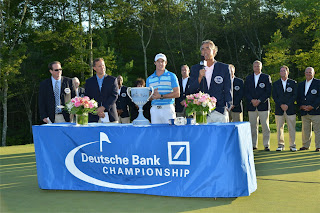 In last year's tournament alone, charitable contributions reached $2.4 million.  Clearly, the Deutsche Bank Championship is far more than a PGA Tour event, but rather an event for the entire region.  Capitalizing off its current status as the second of four tournaments that are part of the FedEx Cup Playoffs, the tournament receives high exposure both locally and on the national stage.  This results in the biggest names in golf coming to Norton, great attendance, and most importantly, large charitable donations.

The Deutsche Bank Championship is just one example of what is happening at tournaments across the country.  Tournaments from the PGA Tour, Champions Tour and Web.com Tour combined to surpass $130 million in charitable contributions in 2012.  As of April 2013, the all-time total raised for charity from the PGA Tour reached $1.86 billion.  It is expected that the $2 billion mark may be reached in early 2014.  The Deutsche Bank Championship is just one of many great stories that can be found on the PGA Tour.

What has been occurring at TPC Boston in Norton over the last decade is somewhat of a model of what sports and entertainment should be - an event that not only impacts the local economy, but also gives back to the community through charity.  That is just what is taking place at the Deutsche Bank Championship next month, when sport and community blend together entertaining fans and raising millions through the act of charitable giving.