It's a problem only the year 2020 could give the Celtics and teams around the league - what to do with all of that empty floor space without fans at the games?  Typically at TD Garden or any other National Basketball Association arena, the court is surrounded by about three rows of seats on each side of the court, while the ends usually have ten or more rows set as "risers" extending into the lower level.  But in a pandemic, with the Celtics and most teams playing in empty arenas, that is just not the case anymore. 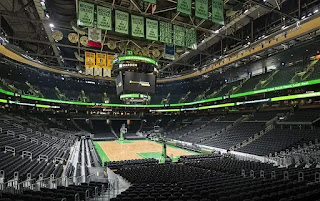 Or should it still be?  No, not seats with fans, but just the seats themselves.  Watching the game on television, the sight of a court with no seats is not always so visually appealing.  And let's face it, sports have basically become "made for TV" in 2020.

If you've ever gone to a minor league basketball game in a large arena, this not-so-great visual of empty floor space is nothing new.  Many G-League and other minor league teams have battled this problem for decades.  Even scenes of the old American Basketball Association show that teams struggled with figuring out what to fill in floor space with.

It's an issue that does not get a lot of press, but during this 2020-21 season, you can't watch a game without noticing it.  Some teams have done a great job, as seen in Sunday night's Celtics game against the Indiana Pacers.  The Pacers have filled in empty floor space with not only an additional press table, but also a new car on display.  This has been done in other leagues, and even on concourses inside NBA arenas in the past, but to see a car right next to the court of an NBA game is an interesting use of space.

For the Celtics, watching a game at TD Garden without seats on the floor has an issue: TD Garden, unlike Indiana's arena, is built for hockey dimensions.  Most NBA arenas have this design, where the floor's corners are curved, rather than arenas such as the Barclays Center that are angled inward.  The Barclays Center was built with the ability to have hockey, which it has had, but was ultimately designed for basketball.  Since the TD Garden does have a hockey design, an empty floor would be just that - very empty.

It might be more visually appealing to add seats even if they are unused, and would also add an interesting perspective of seeing a completely empty floor, and a completely empty arena.  It’s a rare sight for sports fans, and once it’s all over, hopefully we won’t have to see it again for a very long time.