Officially it was not "Whalers Night", but throughout the TD Garden Tuesday night, it was 1997 all over again.  That was the last season the Whalers played in Hartford before moving to North Carolina.  But a decision this season by the Carolina Hurricanes to hold a "Whalers Night" in Raleigh featuring vintage Hartford Whalers jerseys followed by a game in Boston to again wear the famous Whalers green allowed fans to unofficially declare Tuesday Night in Boston their own "Whalers Night". 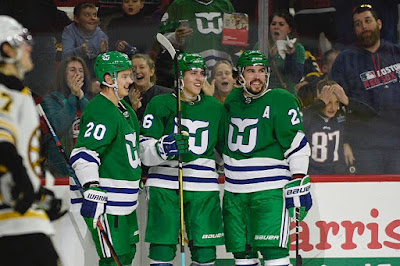 For New England hockey fans, it was something special.  Hearing chants of "lets go Whalers", a following of faithful fans making the trip from Connecticut wearing Whalers green, and a very rare opportunity to see the Bruins once again wearing their white jerseys at home made for a unique atmosphere at TD Garden.

Since the 2003-04 season, National Hockey League teams typically have worn white jerseys only on the road, with the exception of certain situations.  Tuesday night was not only reminiscent of seeing the Bruins in their traditional white home jerseys, but also gave fans an image they have not seen in 21 years - Whalers green on Boston's home ice.

Tuesday night was an occasion seldom seen in sports - a "promotion" during an away game.  The Hurricanes franchise deserves credit for paying homage to a historic New England rivalry, and even doing so while not on home ice.

After a 4-3 overtime win for the Bruins, Tuesday night brought out the best in hockey.  A game that had the feeling of 1997, paying tribute to 18 years of an intense regional rivalry, but also showcasing the exciting brand of modern hockey we see today.  Had this game been played the last time the Whalers existed, the game would have been played with 5 skaters during overtime instead of the 3 skaters per team now used, a rule that has been enacted to increase goals during overtime.

Anyway you want to put it, Tuesday night was an exciting night for hockey fans.  A night only made possible by a Carolina franchise bringing back the sight of a classic, special New England rivalry.