The 2018 NCAA Men's Basketball East Regional at TD Garden may not have had any local teams, but last weekend the venue included a lot more of the city than the previous time the tournament stopped in Boston.

Actually, you could multiply the Boston influence by 23 times to be exact.  That's because in 2012, the last time TD Garden was chosen to host the tournament, every professional championship banner had to be removed. 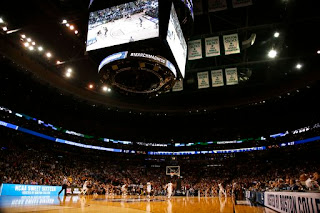 Fortunately for Boston fans, in 2018 the NCAA allowed TD Garden to keep all championship banners for the Celtics and Bruins.  Not only did this help out TD Garden staff enormously, who already had enough on their plate to ensure the venue was ready, but this also gave Boston fans and the estimated 8,000-10,000 visitors from out of town a chance to embrace in everything that is the tradition of Boston sports.

Although the famed parquet floor was not allowed, or any other local floor throughout the tournament, at least the banners gave the tournament's stop in Boston a little bit of a local feel.  Not to mention a small Boston College logo on the corner of the court, given to the school for being the host of the East Regional.

The tournament also helped the city economically, and in impressive fashion.  The two-night, three-game event last weekend was projected to bring in $25 million in economic impact, filling hotels, restaurants, shops and other establishments throughout the city.