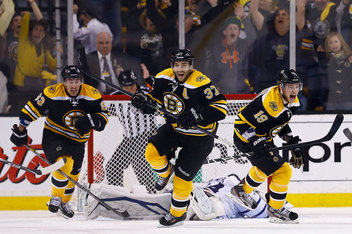 In a report released by SportsBusiness Journal, the Bruins television ratings have increased 41 percent from last season, finishing with the third-highest television rating in the National Hockey League.  The Bruins' average rating was a 6.60, falling short of only Pittsburgh and Buffalo.

Pittsburgh finished with a league-leading rating of 12.56, while Buffalo ended the season with a 9.46 rating.

While the Bruins' 41 percent increase was impressive, it was not even in the top 5 for rating increases from the 2011-2012 season.  The New York Islanders were victors in that category, as their on-ice performance this season lead to a 133.3 percent change.

The Bruins also finished in the top 5 in average audience size, good for second in the league with an average of 156,000 households.  Boston, the nation's seventh largest media market, fell behind only Chicago, the nation's third largest market.

What does all of this say?  Well it is something we already knew - Bruins fans are supporting their team the way passionate fans should support a successful team in a traditional hockey market.  Ratings are up, merchandise sales are strong, and tickets continue to sell out every game at high prices.  Also noteworthy, is that the secondary market ticket sales (StubHub) are strong as well, with playoff tickets currently starting at $165 per seat.

Times are good for the Bruins.  Think back to how this differs from the pre-2007 teams, when season tickets dipped below 5,000, and this is a classic example of how improved on-ice performance can turn around a franchise.